Mark di Suvero: Selected Small Works runs concurrently with Mark di Suvero at Crissy Field, organized by the San Francisco Museum of Modern Art (SFMOMA) in partnership with the National Park Service (NPS) and Golden Gate National Parks Conservanc. This major outdoor exhibition of Mark di Suvero's works near the Golden Gate Bridge includes eight large-scale steel sculptures installed at historic Crissy Field, a former airfield and military base that is now one of the most-visited national park sites within the Golden Gate National Parks. Curated by SFMOMA Director Neal Benezra, Mark di Suvero at Crissy Field surveys five decades of the artist's work including a recent sculpture that has never before been on public view. The temporary exhibition will be the largest display of di Suvero's work ever shown on the West Coast, and free for all visitors, extending the programs celebrating the Golden Gate Bridge's 75th anniversary.

Often regarded as one of the most important living American sculptors, Mark di Suvero began his steady rise to prominence in the 1960s with exhibitions at the March Gallery, NY (1958), Green Gallery, NY (1960), and his ground breaking solo exhibition at the Jardin de Tuileries, Paris (1975), where, as the first living artist bestowed with this honor, he exhibited the monumental, industrially informed works that have become synonymous with his name.  That same year, di Suvero was given his first one-person American museum exhibition at the Whitney Museum of American Art, which included many smaller works that were similar in scale to the sculpture highlighted in this current exhibition.  Today, di Suvero is best known for his large outdoor sculpture – works such as Pax Jerusalem (1999) at the California Palace of the Legion of Honor, San Francisco, California, and Mother Peace (1969 – 70), which is one of the works included in Mark di Suvero at Crissy Field, that demonstrate his long lasting commitment to public art.  These large works require audience participation, begging for the type of meditative circumambulation that was popularized early on by the Greco-Romans and reemphasized by Michelangelo and his followers in the 1500s.  However, this need for viewer interaction is a major tendency in di Suvero’s small scale sculpture as well, and is evidenced at John Berggruen Gallery in works such Sandwich 1 (2007) and The Hair from Vincent’s Beard (2012).  Rather than function as models, maquettes or studies for his larger pieces, di Suvero’s smaller sculptures are intended to be viewed as fully realized works of art.  They have been an integral component of di Suvero’s oeuvre throughout his career and offer entrée into his world in a very intimate way.

Mark di Suvero is nothing if not a man of many interests.  Wide ranging preoccupations with poetry, music, mathematics, engineering, politics and philosophy make their way into the conception, construction, and naming of his work, influencing his artistic perspective and reflecting deeply rooted and universal interests and emotions, as well as refining and civilizing what many would consider the utilitarian medium of steel.  As Jan Garden Castro writes in the 2005 interview for Sculpture Magazine, “His steel geometries connect earth and sky, space and time.  Primordial elements, physics, music, poetry, and philosophical influences also find their way into the mix.  di Suvero’s wizardry melds the monumental and the intimate, humanizing steel as though it were another form of writing by hand.”[1]

Born in Shanghai in 1933 to Italian parents, di Suvero’s family moved to San Francisco when was he was seven years old.  di Suvero studied philosophy and art at the University of California, Santa Barbara, transferring to UC Berkeley in 1955, where he graduated with a Bachelor’s degree in philosophy before moving to New York in 1957.  In 1960, while preparing for an exhibition at Green Gallery, di Suvero suffered a job-related accident, resulting in paraplegia, which left him in a wheel-chair for a year.  The accident prompted di Suvero to turn to steel as an artistic medium because of his ability to weld it while still confined to his wheelchair.  In 1972, di Suvero emigrated to Europe in opposition to America’s war efforts in Vietnam.  He was met there with much success, staging exhibitions at the Stedelijk Van Abbe Museum in Eindhoven, the Netherlands (1972), Chalon-sur-Saône, France (1972-1974), Le Jardin des Tuileries, Paris, France (1975), as well as the 1975 Venice Biennale, in which he also participated in 1995.  In 1976, he founded the Athena Foundation in New York and in 1985 the Socrates Sculpture Park in Long Island City.  di Suvero had his first major exhibition at the Storm King Art Center in 1985, and again in 2005.  He was the recipient of the Heinz Award for the Arts and Humanities in 2005 and has been honored with the Lifetime Achievement in Contemporary Sculpture from the International Sculpture Center.  Mark di Suvero’s work can be found in many public collections worldwide, including the Hirshhorn Museum and Sculpture Garden, Washington D.C., the National Gallery of Art, Washington D.C., Moderna Museet, Stockholm, Sweden, Los Angeles County Museum of Art, California, the Metropolitan Museum of Art, New York, and the Museum of Modern Art, New York.  He currently lives and works in New York and maintains studios in France and California.

For further information please contact Tatem Read at 415.781.4629 or tatem@berggruen.com 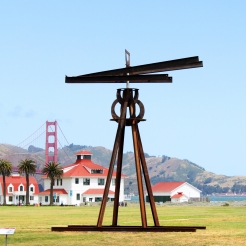