"Wayne Thiebaud: Paintings and Works on Paper" highlights some of Thiebaud’s most significant work from throughout his sixty year career. Many of the works on view have been in private collections and have rarely been exhibited. The exhibition consists of approximately thirty examples of Thiebaud’s oeuvre, including a number of quintessential dessert and object still life works, as well as several paintings of the Sacramento delta and San Francisco cityscapes, spanning from the early 1960s through the late 2000s. The works included in this exhibition represent the qualities for which Thiebaud is most known-his use of heavy pigment and exaggerated colors to depict his subjects, and the well-defined shadows that are characteristic of advertisements. All of the works included in the exhibition are reproduced in the catalogue. 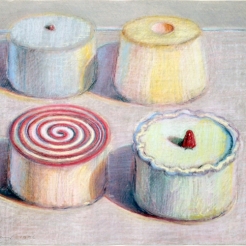