Nathan Oliveira has been a prominent figure in California art circles since the 1950s. Oliveira was born, raised and educated in the San Francisco Bay Area and is often linked with the Bay Area Figurative movement led by Richard Diebenkorn, David Park and Elmer Bischoff. In these works Oliveira continues his examination of the Stele Figures which have been inspiring images for him since 1990. This newest image comes from a Chinese Han Dynasty stele that is in the artist's garden. This ancient rectangular stone was used to calculate layers of time and reigns of rulers is transformed into a figure by Oliveira showing the "vertical nature of living energy". Also included in the exhibition are a series of works on paper entitled Standing Figures Revisited. These are color trial proofs from 1989 that have been reworked and updated with additions of oil and wax. Each in the series examines a different dimension of color. He uses a new palette in these recent works; earth tones that have the luminosity of sky colors or "ethereal earth tones". Through his use of color and form he explores different and multiple realms, balancing his "beings and half beings" between reality and the spirit world. 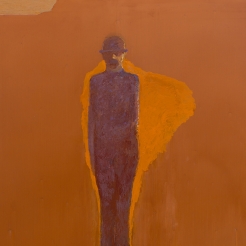