Mark Adams is best remembered for his versatility as an artist, possessing talent in a diverse array of artistic media including tapestry, stained glass, oil painting, mosaic, drawing, watercolor, and printmaking. Early in his artistic career he focused on tapestry and stained glass. By 1962 Adams had two solo exhibitions of his tapestries at the de Young Museum and the San Francisco Museum of Modern Art. He completed tapestry commissions for various institutions, including the San Francisco International Airport. Adams later took an interest in stained glass, which he considered an extension of his work with tapestry and his enthusiasm for liturgical art. By 1975, Adams grew frustrated with the limitations of his craft and the lack of complete control he had over the actual fabrication of his work. Drawn to the idea of small, intimate, and personal works that he could manage from beginning to end, he began a new venture in watercolor. Adams soon realized he could incorporate his techniques of flat planes of color as he had in tapestry and stained glass by using a wash to create his desired spatial effects, along with continuing his ideas of transparency and luminosity. He favored the quotidian subjects that exemplified his life, depicting them in such a way as to evoke a sense of nostalgia. Adams eventually learned to deemphasize his precise technique as a means to communicate his excitement for the subject he was portraying. 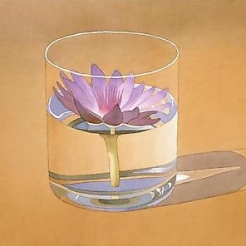 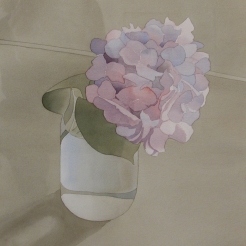