Since he began painting in the late 1930s, Lee Mullican's work has remained notoriously difficult to pin down to any one particular genre. Mullican's art was influenced by everything he saw in the environment around him, by both the phenomenal and the mundane, and made no distinction in its depiction of the grandiose and minute components of existence. Additionally, he spent much of his life traveling. As a result, his paintings exhibit a distinct type of multifarious aesthetic that make them easily identifiable as Mullicans, yet increasingly elusive to define in terms of a specific artistic movement. Perhaps the most identifiable characteristic evident in all of Mullican's canvases is his preference for the printer's ink knife over the brush as a primary decorative tool - the effect of which can be seen in the sharp, repetitive, and obsessively applied lines of paint apparent in every one of the paintings included in this exhibition. Lee Mullican: Paintings 1952-1968 represents a homecoming of sorts for the artist and his works to San Francisco. Three of the paintings highlighted in this exhibition and its accompanying catalogue -Shatter Passage (1963), Sleeping Gypsy (1965), and Transfigured Night (1962) – were included in the 1965 exhibition Symbolist Painting by Lee Mullican at the San Francisco Museum of Art (now San Francisco Museum of Modern Art). Mullican lived and worked in San Francisco for only a brief period of time (1946-1952), but it was a time of incredible artistic and philosophical development, during which Mullican played a major role in the foundation of the Dynaton movement alongside artists and like-minded thinkers Wolfgang Paalen and Gordon Onslow Ford. The Dynaton movement appropriated its name from the Greek word dyn, which means "that which is possible." According to Kimball Whiting, the goal of the Dynatons "was to forge an ever-expanding art rooted in the timeless." Although the group disbanded subsequent to their 1951 exhibition at the San Francisco Museum of Art, the goal of achieving timelessness in art remained paramount in Mullican's practice until his death. 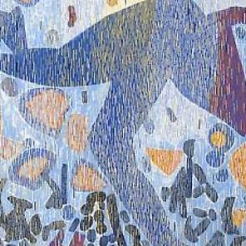