The celebrated American painter's birthday is being marked in his hometown of Sacramento with a delightful retrospective.

On November 15, Wayne Thiebaud, the cherished American painter of cakes and sweets, hits an impressive milestone: his 100th birthday.

Born November 1920 in Mesa, Arizona, and raised in California, Thiebaud remains busy and productive even on the eve of his centenary.

“I spend a lot of time in the studio,” he told Artnet News. “I work almost every day. I have a wonderful family who indulges me in this amazing search for how difficult it is to make a good painting.”

Thiebaud’s birthday is being celebrated in a big way in Sacramento, the city he’s called home for 70 years, with a retrospective, “Wayne Thiebaud 100: Paintings, Prints, and Drawings,” that opened last month at the Crocker Art Museum.

“It’s wonderful to do things in your own hometown,” the artist said.

Unfortunately, the museum was forced once again to close on November 13, but after the exhibition reopens, it will travel to Ohio’s Toledo Museum of Art; the Dixon Gallery and Gardens in Memphis; the McNay Art Museum in San Antonio; and the Brandywine Museum of Art in Chadds Ford, Pennsylvania. (On November 15 at 4 p.m. PST, chief curator Scott A. Shields will give a virtual tour of the show for Crocker members.)

Thiebaud also has a smaller retrospective currently on view at Berggruen Gallery in San Francisco. Another is slated to open at the new Palm Beach outpost of the artists’s New York gallery, Acquavella, on December 20, and run through February 20, 2021.

We spoke with Thiebaud earlier this month about what it’s like to have a retrospective at age 100, the truth behind his apparent obsession with cake, and the secret to his longevity.

Your 100th birthday is coming at the end of what’s been a very challenging year. Do you remember another time when so much seemed to be going wrong in the world?

I experienced the Depression, of course. Even as a young person, I could see how difficult it was for people trying to survive. But it was somewhat different. People were not divided. They seemed to be willing to help each other. Because we were all in the same situation, we worked back and forth and had wonderful interchanges. It wasn’t so anxious and so strident, as it seemingly is today.

For those people struggling to cope with current events, what kind of cake is best?

I think I’d rather tell them, be careful about eating too many sweets and watch your vegetables. Sugar is kind of an enemy of good health. Be careful, be judicious, and enjoy it when you have it, but don’t have it too much!

What can people look forward to in your retrospective at the Crocker?

We have given many gifts that are in the exhibition to the Crocker over the years and then we added some that hadn’t been seen by very many people. The best thing about it is that it’s in my own hometown.

Speaking of Sacramento, how has it changed over the decades, particularly with the rise of Silicon Valley and the increased stratification of wealth across the nearby Bay Area?

There are very big changes in Sacramento. The city has kind of grown up. We have lot more restaurants—some very good ones. We have two majors universities that developed the culture. It’s changed dramatically over the years, all to the better, and all to the more interesting.

What was it like working for Walt Disney, and what do you think about the evolution of animation over the last century?

I worked at Disney for a very short time when I was very young. I was only 16. Students submitted drawings. If they thought you were capable enough, they put you put you on probation as what they called an in betweener, which meant that you drew all the images in between what an animator would sketch out. In other words,  you’d fill out all the frames. Today, it’s been computerized, which is a very, very different thing. The old handmade cartoons are quite different and, for me, much more special.

What in your early professional life were the biggest influences on your eventual career as an artist?

Since I didn’t go to art school, I had a lot of wonderful women mentors, dress designers and fashion illustrators, sign painters and graphic artists who showed me how to do things. They were very kind and helpful, so I owe a great deal to those wonderful people.

I worked in those places at a very low level. Sign painting, I’d be cleaning the brushes or making pastes-ups, doing very menial things. Slowly you work your way up and eventually I got into art direction and graphic design. I decided at some point I wanted to try and become a painter, so I left that kind of work, I went back to the university, and that’s when I became a teacher.

What drew you to painting those sweet, sugary confections that so many of us love so much?

It’s because I hadn’t seen anyone paint those things, which I looked upon and found quite interesting and beautiful. If you really look at a lemon meringue pie or a beautiful cake, it’s kind of a work of art, and that’s what attracted me. And when you put them in rows, you have the ability to orchestrate them, to imbue them with what you hope is some some extra interesting looking forms.

It was very fortunate. Once I painted pies I thought no one would be interested in them, it seemed like a silly thing to do. But as I did it and got interested, I couldn’t leave it alone. I looked at all the other things that I thought had been overlooked. Like rows of beautiful round suckers or candied apples or gum ball machines or all of the things which we use in displays in windows on tops of counters. That was my subject matter until I decided to try other subject matters, because I didn’t want to continue too long in one vein.

Looking back at your career, of what are you the most proud?

If I’m proud of anything, it would be my long career in teaching and having the joy and the privilege of watching students come to recognize how to do things and the joy of doing them, and to make a life around that wonderful activity. I still see many of my former students, and that’s a joy as well.

So much of your art is about Americana. How do you feel the symbols of American life have evolved, and have you had to adapt to a century of change in this country?

I don’t think I have had to change, because I grew up in America with American situations of learning and working and the great artists we have developed America. But mostly, I just see America as a great idea.

What kind of cake do you want for your birthday?

I don’t want to jinx myself because I’m still almost two weeks away from my birthday, but I wouldn’t have a cake. I would have a slice of lemon meringue pie, which is my favorite. It was a wonderful kind of pie which my wife [Betty Jean Carr, who died in 2015] made.

What advice do you have for people who’d like a long and happy life?

I would just tell them to stay healthy, have a nice life, read poetry, listen to good music, and get exercise—which I’m going to do as we speak. I’m heading to the tennis court at the moment. 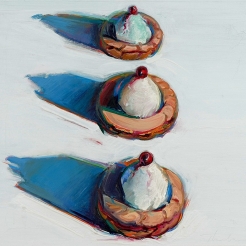