Tom Otterness, who began his career as a public artist in 1978, continues his signature work with figurative cast bronze sculpture. His "button-faced" figures exemplify the human experience with a distinctive combination of narrative, whimsy, economic and political commentary. This exhibition features a selection of work that was inspired by lesser known tales, fables, and allegories. As always, Otterness' characters suggest a reinterpretation of popular culture as they combine truth, wit and satire. 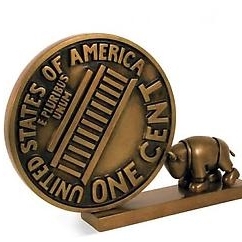