Berggruen Gallery is proud to present Richard Serra: Works on Paper, an exhibition of drawings and prints from 2001 to 2019 by one of the most significant artists of his generation, Richard Serra. This show marks the artist’s second solo exhibition with the gallery and will be on view February 20 through April 4, 2020. The gallery will hold an opening reception Thursday, February 20 from 5:00 to 7:00pm.

Though predominantly known and celebrated for his monumental sculptures, Richard Serra’s works on paper are tremendously important to his practice. Serra explains, “drawing gives me an immediate return for my effort and the result is commensurate with my involvement. It is an activity that requires solitude, it is the most concentrated space in which I work.” The artist has created drawings as a separate and immediate meditation for the near entirety of his career. Serra’s drawings simultaneously function as unique works, as well as elementary line investigations into his sculptures. His gestural sweeps of paintstick and crayon are urgent and explorative, revealing something increasingly instinctive and intimate within the artist’s greater oeuvre.

Employing a breadth of innovative techniques, Serra evolves the very mediums of drawing and etching. In his drawing practice, the artist heats paintstick or oilstick to a viscous state in order to further direct his mediums onto handmade papers. Turning to his work in printmaking, Serra also reinvigorates the traditional etching medium by using deeply bitten plates in his conception of gestural forms. Throughout his career and to this day, the artist experiments with highly sophisticated screenprint and intaglio techniques with Gemini G.E.L, resulting in exquisite prints which demonstrate a deeper and more articulated relief.

Spanning the last two decades of the artist’s career, the work comprising Richard Serra: Works on Paper displays a unique realization of the kind of forms Serra has been most recently consumed by. With bold lines that curve, wind, and spin, Serra’s mark-making on paper evokes a similar excitement to his acclaimed sculptures. Other pieces abandon Serra’s major concern with curvature, instead boasting textural studies in etching ink and silica. Altogether, the artist’s works on paper present themselves as dense and confrontational while simultaneously remaining playful and experiential.

Richard Serra was born in San Francisco, California in 1939. Serra first studied English literature at the University of California, Berkeley and later at the University of California, Santa Barbara from 1957-1961. He supported himself by working in steel mills, which had a strong influence on the work for which he would become renowned. Serra also cites the San Francisco shipyard, where his father worked as a pipefitter, as influential. Serra went on to study painting at Yale University, where he received his B.F.A. and M.F.A. by 1964. Serra received his first solo exhibition at the Galleria La Salita, Rome, in 1966. Two years later, the young artist had his first American solo exhibition with Leo Castelli, New York, in 1968. Serra’s work has been honored with two retrospectives at the Museum of Modern Art, New York in 1986 and 2007. From 2011 to 2012, Serra had a major traveling retrospective dedicated to his drawings, presented at the Metropolitan Museum of Art, New York, San Francisco Museum of Modern Art, and the Menil Collection, Houston. Other major museum shows devoted to Serra's drawings include: Stedelijk Museum, Amsterdam, 1977-1978;  Kunsthaus Bregenz, Austria, 2008; and Museum Boijmans van Beuningen, Rotterdam, The Netherlands, 2017. His work is held in important private and public collections across the globe, including the Art Gallery of Ontario, Toronto, Ontario; Art Institute of Chicago; the Detroit Institute of Arts; the Dia Art Foundation, New York; the Guggenheim Bilbao; the Los Angeles County Museum of Art; Museum für Moderne Kunst, Frankfurt; the Museum of Modern Art, New York; the Nasjonalmuseet, Oslo; the Nasher Sculpture Center, Dallas; the National Gallery of Art, Washington, D.C.; the National Museum of Modern Art, Kyoto; the Philadelphia Museum of Art; the Qatari Museums Authority; the San Francisco Museum of Modern Art; the Stedelijk Museum, Amsterdam; Storm King Art Center, Mountainville, New York; and the Tate Modern, London. Additionally, Serra has achieved numerous awards and honors, including the Leone d’Oro for lifetime achievement, Biennale di Venezia, Venice (2001); Orden Pour le Mérite für Wissenschaften und Künste, Federal Republic of Germany (2002); Orden de las Artes y las Letras de España, Spain (2008); President’s Medal, Architectural League of New York (2014); Chevalier de l’Ordre national de la Légion d’honneur, Republic of France (2015); and J. Paul Getty Medal (2018). Richard Serra currently lives and works in New York City and on the North Fork of Long Island. 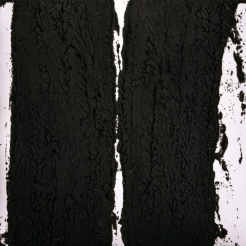 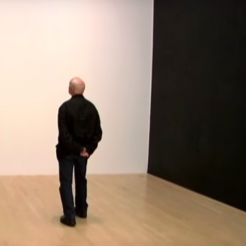