John Berggruen Gallery is pleased to present an exhibition of new sculpture and photographs by Dallas-based artist, Linda Ridgway. The reception for the artist will be held on Thursday, February 1st from 5:30-7:30pm.

Ridgway's poetic bronze wall reliefs convey both elegance and beauty. Although educated as a printmaker, Ridgway continues to experiment with the limits of various media to create work that remains intimate regardless of scale. Ridgway's bronzes, inspired by organic and cultural imagery, emerge from a two-dimensional surface to become new sculptural objects in space. Her work often translates traditional feminine crafts and materials, such as knitting and lace, into prominent sculptures.

As a sculptor, Ridgway has a keen interest in other artists who share similar concerns in materials and content. Eva Hesse was one such artist and whose work influenced Ridgway's artistic development. Ridgway found that Hesse treated materials in flux and gave them solidity. In addition, Ridgway discovered the poignant expressive potential in lines draped across large blank expanses. In Ridgway's own work, her linear, often repetitive forms become strands of thought. 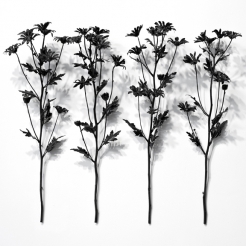