John Berggruen Gallery is pleased to present an exhibition of new paintings, sculpture, works on paper, and photography by contemporary artist Enrique Martinez Celaya. For two Martinson poems, poorly understood opens on October 4th and will continue through November 3, 2007. John Berggruen Gallery will host a reception for the artist on Thursday, October 4th from 5:30 - 7:30pm.

Martinez Celaya states "In this exploration of or inquiry about highly abstract ideas, I have used the poetry of the Russian Osip Mandelshtam and the Swede Harry Martinson. I use their poetry because it traverses a landscape of personal loneliness and strives towards the holding of large and unwieldy ideas through deceivingly simple poems." The poetry of Harry Martinson (1904-1978), from whom the exhibition title acquires its name, was noted for its intense observation of nature through an innovative use language. His most famous writings, including Aniara (1956) and View from a Tuft of Grass (1963), have many themes in common with Martinez Celaya's most recent work - particularly in their approach to ideas of fate and isolation and the dominance of these themes in the spare depictions of nature and humanity. The influence of Osip Mandelshtam (1891-1938) is most obvious here in the photograph The house: still whole - a haunting image of a young child's back tattooed with a portrait of the poet taken by the NKVD upon his second arrest. Mandelshtam was a core member of the Acmeists (from the Greek word, acme, meaning "the best age of man"), a guild of poets established in Russia in 1910 as a movement away from the elitism of the Symbolists towards a populist poetry that centered around ideas of a world culture, human existence, and a craftsman's attention to the written word. Taking influence from these two poets Martinez Celaya writes, "In this series, I tried to explore the limits of holding basic questions of existence in thought or words or art; in particular, how those limits impose themselves in my efforts to consider new choices against a growing body of past choices." Accordingly, the paintings, sculpture, works on paper, and photograph that comprise For two Martinson poems, poorly understood are all current manifestations of Martinez Celaya's attempts at making sense of the world as he sees it today. "Tomorrow," he states, "I might work with words or empty rooms."

Martinez Celaya's work is represented in a number of important public and private collections including the Whitney Museum, the Metropolitan Museum of Art, the Museum of Fine Arts in Houston, the Los Angeles County Museum of Art, the Oakland Museum of Art, and the Museum der Bildenden Kunste in Leipzig, among others. Martinez Celaya received the Los Angeles County Museum of Art's "Art Here and Now Award" in 1998 and is the 2001 recipient of The Hirsch Grant. He has also received the Anderson Ranch National Artist Award, the California Community Foundation Fellowship, and the J. Paul Getty Trust Fund for the Visual Arts. Additionally, in 1998 he founded Whale and Star, a publishing house whose books are distributed internationally. He has written and edited books, papers and essays on the nature of art and its relationship to literature, science and philosophy. He currently lives and works in Delray Beach, Florida and Los Angeles, California. 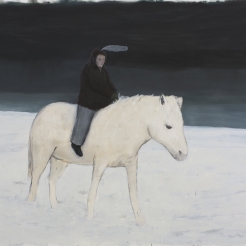