Lucian Freud is the grandson of Sigmund Freud and his father, Ernst, was an architect; his mother the daughter of a grain merchant. Lucian Freud was born in Berlin in 1922 and moved to Britain in 1933 and became a British national in 1939. In 1938 and 1939 Freud studied at the Central School of Arts in London; from 1939 to 1942 at the East Anglian School of Painting and Drawing in Debham run by Cedric Morris; in 1942/43 at Goldsmiths' College, London (part-time). One of the foremost figurative artists working today, Freud has redefined portraiture and the nude through his unblinking scrutiny of the human form. Although best known as a painter, etching has become integral to his practice. Freud is not a traditional printmaker. He treats the etching plate like a canvas, standing the copper upright on an easel. Freud typically depicts the same sitters in etching as in painting, always working directly from his models and demarcating their forms through meticulous networks of finely etched lines. Freud's etchings achieve a startling new sense of psychological tension and formal abstraction while his impasto portraits and nudes make many regard him as the greatest figurative painter of our time. 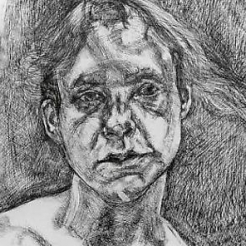