For John Alexander, whose childhood consisted of camping and fishing trips in the bayous and woods of East Texas, nature is a frequent subject. His lush paintings populated with diverse flora and fauna signal a reverence for the tradition of landscape painting as practiced by such art historical masters as Claude Monet or the more recent Hudson River School painters of the American northeast. As an undergraduate majoring in applied-arts at Lamar University in Beaumont, Alexander was influenced by professor and friend, Jerry Newman, whose courses emphasized academic training in drawing, painting, and art history. Himself a skilled draftsman, Newman encouraged his students to develop of a firm foundation in still-life drawing and to copy sketches by such masters as Leonardo da Vinci. Evidence of Alexander’s rigorous formal training is not lost on a viewer of his works, which profess the skill and knowledge of an artist eagerly passionate about nature from the standpoint of enthusiastic student and devoted environmentalist. Alexander’s vision of nature, for example, was influenced by his father’s avid environmentalism and acute awareness of the devastating effects that industry and pollution had on the forests and habitats of his native Texas. The bucolic subject matter of Alexander’s paintings belies their subtle energy. His keen observations of the natural world and vivid imagery are the idiosyncratic expressions of an artist for whom everything is symbolic. The exoticism and beauty of his creations, as romantic as they seem, possess an introspective quality and speak to the psychology and experiences of the artist.

Alexander was born in Beaumont, Texas, in 1945. He received his B.F.A. from Lamar University in Beaumont in 1968 and his M.F.A. from the Southern Methodist University in Dallas in 1970. Following graduate school, Alexander taught at the University of Houston. Today the artist divides his time between his SoHo studio loft and home in Amagansett, East Hampton. Alexander’s work has been widely exhibited at such prestigious institutions as the Corcoran Gallery of Art and the Smithsonian American Art Museum, both in Washington, D.C., and the Museum of Fine Arts, Houston. His work is featured in the permanent collections of a number of leading institutions, including The Metropolitan Museum of Art, New York; the Dallas Museum of Art; and the Museum of Contemporary Art, Los Angeles; as well as many other distinguished public and private collections worldwide. 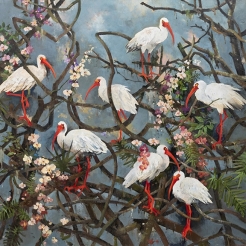 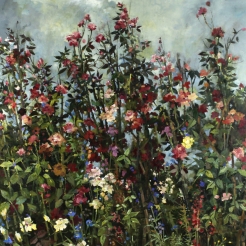