George Rickey was born in South Bend, Indiana in 1907. He began to study in Oxford in 1926, but went to Paris in 1929 where he finished his studies in 1930. In 1945, he made the first mobiles which were inspired by both the history of constructivist art and by the mobiles of Alexander Calder. He designed his works on the basis of the ideas of kinetic sculpture. In the 1950s and early 1960s, Rickey developed systems of motion for his sculpture that responded to the slightest variation in air currents. Unlike Jean Tiguely at his time, all of Rickey's mobiles and kinetic plastics moved without auxiliary engines instead relied on wind energy and gravitation for his works. Over the next three decades he developed sculpture with parts made of lines, planes, rotors, volumes, and churns, moving in paths that change from simple oscillation to conical gyrations, describing a variety of planes or volumes. Many works during this period have been large-scale public commissions for sites in the United States, Europe, and Japan. Rickey died at home in St. Paul, Minnesota, on 17 July 2002 at the age of 95. 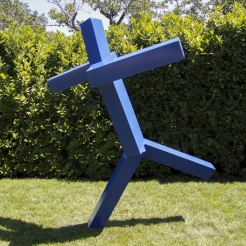